The secrets of Chamber

I was recently discussing the difference between “room” and “chamber”. It’s not quite easy to give an explanation without pondering for a moment. Spontaneously, one would think chamber is a more elegant way of designating a room. The word room is a more used than chamber: bedroom, living room, bathroom, etc.

However, it does not work the other way around: bed-chamber, living-chamber, bath-chamber all sound rather odd.

Chamber has a rather immediate association with formal institution: Chamber of Commerce, Chamber of Lords, etc. Nonetheless it is not the only meaning it has. In fact, according to the free dictionary, the first entry is “a room in a house, especially a bedroom”.

That makes me wonder about the expression of room in other languages. In French, the most general term for room is pièce. The bedroom, chambre à coucher, is usually simply called chambre, matching the English version of chamber. However, all other rooms are called salle: salle de bain, salle à manger, and so on. It should be noted that salle d’eau and pièce d’eau have different meanings, even if they seem to point toward the same meaning. 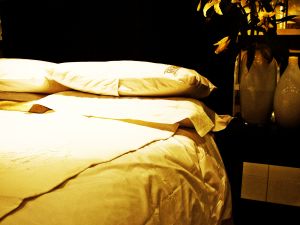 In German, we have a wider range of terms: Raum, Zimmer, Saal and Kammer are to be dissociated.

Raum has a rather general meaning, like room in English. However, the word Zimmer is used to form the names of the rooms in a house: Wohnzimmer, Schlafzimmer, Badzimmer, etc.

According to the Duden, Kammer used to be the word to refer to the bedroom, however it is now understood as a small room for storage. Kammer is otherwise found in rather isolated or specialised cases (Wirtschaftskammer – Chamber of Commerce).

Saal is however a larger room, I cannot think of an equivalent in English. Salle in French however is not thought as being particularly big.

According to the RAE, cámara is the main room in a house or an organisation (again, in a case of a political chamber or similar)

The word pieza is the most generic term, see pièce in French.

The word sala follows the meaning of Saal and salle: the word conveys with itself an idea of importance and bigness.

The word cuarto designs any room of the house, however it refers to the bedroom unless specified otherwise (cuarto de estar, cuarto de baño) just like chambre. The word cámara does not work in that context however, cama means bed. The link lies in the furniture.

Cuarto is synonym of habitación, a false friend meaning bedroom and not habitation.

I’m sure it’s all crystal clear to you now, right? Well, to me either, but if you read the article again say 20 times, you should grasp what I’m trying to explain 🙂