The mysterious world of punctuation conventions 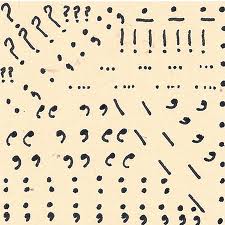 Punctuation is very often neglected and deemed as not that important by too many people who are brought to write. Ask English speakers how they differentiate the uses of colons and semicolons, they are not that assertive about how to use them correctly, if at all. But this is not about the use of punctuation, many books have been written about that topic. Lynne Truss’s legendary Eats Shoots and Leaves is the one reference I would redirect you too if you are interested in the matter.

There are two ways how we ignore punctuation. Either we are so familiar with it that we do not pay attention to it anymore or we are so confused about how it works, that we just throw it in randomly and, unfortunately, too often misuse it. Either way, very few of us think about it.

Yet, punctuation is full of curiosities. One example to illustrate my previous point is how Spanish place inverted exclamation and question marks at the beginning of their respectively exclamative and interrogative sentences. You never really pay attention to it until you are to write Spanish and it is drawn to your attention you forgot those unusual marks.

On a more subtle aspect, that some will call meaningless, punctuation formatting is also subject to new trends. The most striking example is how French formatting traditionally inserts a space between a word and punctuation marks, with the exception of the full-stop and the comma. Thus, you should see “Vive la ponctuation !” or “Virgule ! Où te caches-tu ?”. However I have noted that this little space tends to be overlooked and omitted more and more, even by translators and journalists. Are we going toward a reformed punctuation?

As a miscellenious piece of information to conclude this post, if you see a sentence in Greek ending with a semi-colon, it is not a mistake. It means the sentence is interrogative.