Somewhere between monolingual and bilingual?

Talking on the phone with a friend in French, I was trying to find how you say “kidney failure” or “his kidneys could fail” or any other form of explaining the medical tragedy. As it turns out, I don’t know how to say that in French. I had to check in a dictionary to find the right term (insuffisance rénale) and even then, the phrase did not strike me as something I knew and had forgotten.

So this part of my knowledge, and some others most likel 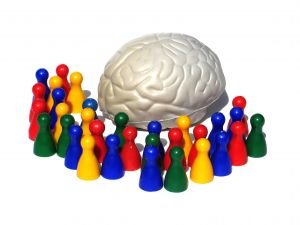 y, was first learned in English and, until now, never explored in French.

Is that phenomenon a common one? Bilingual or trilingual people are nothing new, but with the increasing amount of people traveling and spending periods of their lives in different places in the world, there must be more people in a situation like mine.

Then my question is: is there a name for that form of thinking? Since strictly speaking it is not bilingualism, how are we to call it? Scattered monolingualism? Patchwork thinking language?

In practice, it does not impede my way of thinking or my cognitive skills. I simply think in English most of the time, throwing in a German or a French word whenever I have linguistic shortage or that a word in the other language is more adequate.