So Berlin – so Final Fantasy VII? 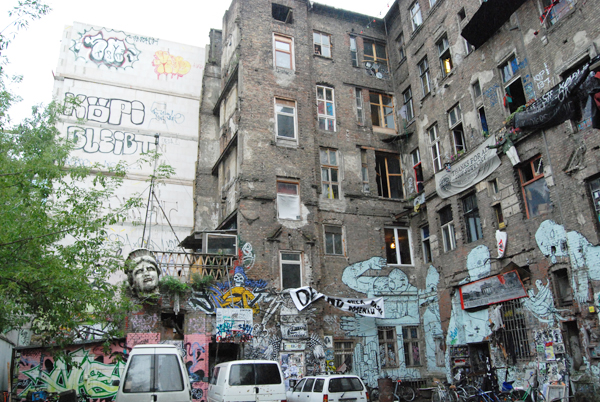 So what do the Hamburgers understand as so Berlin? I believe they think of Berlin as Lady Gaga. It’s some sort of abandoned area, with people wearing green pajamas with pink wellies, an waistcoat, a yellow mackintosh and broad black shades. It’s not punk, it’s not grunge – it’s very carefully chosen clean garments put together in a rather absurd way.

As far as urbanism is concerned, it’s a rows of buildings of different colours, styles and ages, not matching with each other, tangled up with tunnels, railways, street art and metro stations. Not quite sordid but somewhat gloomy and especially fascinating. A dark version of Alice in Wonderland.

What this has to do with Final Fantasy VII is the coincidental resemblance with the city of Midgar, metropolis thrown in constant darkness, divided into 8 districts connected via trains, where violence, black market and terrorism are your daily problems.

Of course, Berlin is far from being as dangerous and malevolent as Midgar, but the inconsistent architecture, the maze feeling to the city and the style of the characters you encounter there provide a rather similar image of what the “Berlin style” is.

I think Berlin would make a great location for some film adaptation of the Final Fantasy VII.